Straight Out of Compton

I was in a movie filmed last August 2014, yet to be released in August 2015, called  "Straight Out of Compton." I was the token white girl in the crowd singing along with a climactic scene anthem: " Fuck the Police" ...

When waiting on the long extra line for the film, a group of black men kept pushing into me on line, telling me to "get the fuck out of the way" cause I didn't belong ... "You skinny white bitch shouldn't be here"... One physically assaulted me pushing me into a small corner by the entrance door. They were tired or waiting on line and had mistaken my soft demeanor as a way in.  When I tried to reason with them, and  let them know how irrational they were being, they would curse and try to intimidate me by standing really close to me, yelling in my face . I remember feeling so disappointed and disheartened that these people wouldn't let me be. They didn't have spiritual eyes, so how could they see me? They didn't know my mind, recognize how I feel about black culture, count my closest friends and see how dark they are... 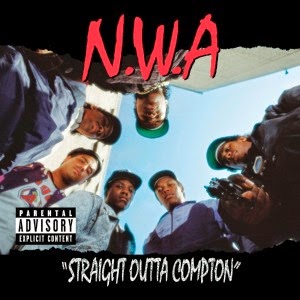 They didn't know I had recently undergone past life regression therapy to witness myself in another age- a black slave abused in every way possible... They didn't know the strength of my soul or my secrets- but yet, felt entitled to hurt me. I reported them to the director's helper, who had his pants practically down to his knees (a prison identity fashion) and he was just as rude to me as the group of blank men. A black police officer comforted me and apologized for the gang  (us-and-them) mentality that exists in the black community. He told the man who pushed me  and a couple of men from the group to leave the premises.

Mom always knows when something is wrong..even though I live in Los Angeles and she lives in New York. Just when I snuck into the restroom of the crew holding area, with tears submerging my vision,  overwhelmed by the chaos, mommy called frantically asking me if I was okay. Mom always knows how to comfort me. She said she felt something was off and needed to call. Mom's voice lulled me to that inner peace I know so well. She's my human angel.

Being bullied is not easy. Perhaps I was triggered because my bully in elementary school was a black boy. Or maybe my soul is confused about it's identity. Or even more so, maybe the world is confused, because of it's cyclical pain and victim-mentality overload.

When I was ready to come out of the bathroom a beautiful model-like black woman asked me if I was okay. I told her what happened. A group of black and Hispanic women circled  me in the bathroom and started to comfort me with words, expressing that they don't know why people are so mean- practicing the very racism that they feel victimized by. When we were in the concert area some girls who heard about the story would randomly come by and rub my back and tell me how strong I am.

One guy who lingered on set from the group of bullies, moved by the amount of love I got from fellow actors, came over to me and apologized for his friend's behavior.

Are you LiSteNinG??  Jaclyn Shaw's Music