A Piece of Us 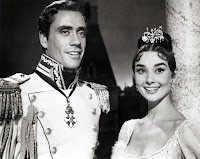 I just finished watching a dramatic three hour long movie called "War and Peace." I enjoyed it thorougly (not only because Audrey Hepburn played a leading role, but...) because it hit home with me. The character of the poor man, shot in the heart for resting admidst the marching tides of falling men, resonated with me most. He said "where there are laws, there is injustice." He optimistically prayed throughout the movie, though his aparent fate fell to a scared soldier of the short but overpowering dictator Napolean. The poor man smiled and praised his murder lovingly, as if his own will called for it. His last words implored the soldier why he was so scared to fire his gun.

I wondered- if I were the one to enforce laws and inspire armies of men to advance in my name, where would I draw the line between war and peace? Napolean had so many choice points to create peace but at each turn he pushed for war, and in the end ... although he usurped Moscow, the scarce population of which he reigned didn't satisfy Napolean.

I know deep in my soul that I am a soldier in many ways. Perhaps it's related to energy I hold from past lifes. Though we fight with loyalty for what we love - family, land, nation, governing prinicipals- When is it a good time to fight to the death? Is it ever?

Historically the way rulers have dealt with standstill controversy is war. I think the dying poor man in the movie died richer than most -knowing no one died by his hand. In many cases on this warring planet, faith in the ideal of absolute love is the only weapon our hearts may need to find peace.

Are you LiSteNinG??  Jaclyn Shaw's Music
Posted by Jaclyn Shaw at 10:46 PM